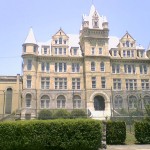 This 1898 prison, which was closed in 1992, has been used for the setting of many films, including “The Green Mile” and “Ernest Goes to Jail.” After its many fires, prison breaks and riots, the prison may well be a spot for paranormal activity. Folks have reported unexplained sounds, voices and footsteps.

Dinner and Spirits: A Guide to America's Most Haunted Restaurants, Taverns, and Inns
Robert Wlodarski