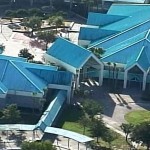 The school’s iconic clock tower was the site of a grisly accidental death in 1994, and supposedly that gentleman’s ghost still haunts the area. Students swear they hear a “ghost bell” through the speakers, and the elevator in the clock tower building emanates a definitively “eerie” feeling. A nearby cemetery (Osteen Cemetery) may be to blame, as some believe the teachers parking lot was built on top of some unmarked graves.