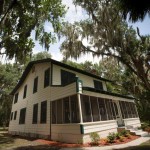 Ma Barker – once Public Enemy #1 – met her end along with her son Freddy at this lakefront house in Ocklawaha, FL. The town does a re-enactment of the shootout (which consumed more than 2,000 bullets) every January. Some say the Barkers’ spirits still haunt the place.