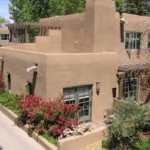 This hotel is allegedly haunted by the former mistress of the mansion, Julia Staab, who died after sinking into a deep and enduring depression following the death of one of her children. Full body apparitions, items flying off shelves and other ghostly happening are all said to have occurred here.

Palace of the Governors