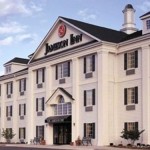 Built in 2000, the Jameson Inn started off with a bang – almost immediately the ghost of a man was seen repeatedly walking the second floor hallways, hanging about near the elevators. Some employees claim room 208 is particularly active.

Other stories are a bit more gruesome:

On one occasion, William Blair was sleeping peacefully in his hotel room at the Jameson Inn, in Crestview, Florida. It was very cold night, when a cool breeze began to stir in the room, moving the bed covers, ruffling his hair. All the windows were closed. It was the middle of winter. “All of a sudden I woke up from the breeze”, said William Blair, a music teacher by trade. And there, as I sat up from the bed, I saw this headless woman in a long white nightgown walking towards me. There was blood dripping from her neck and her veins were sticking out. Then all of a sudden, she vanished through the wall and into the attic as inexplicably as she appeared. Although William never felt threatened by her presence, even when she walked passed his bedside, the experience did leave William so shaken up it required a shot of whiskey to settle his nerves.”I have never believed in ghosts, replied William. But on that particular night, I saw one”. This encounter occurred about 9 years ago, right after he rented the room on Cracker Barrel Dr.in Crestview, Florida.

It looks like this may now be branded as a “Quality Inn” according to the latest land records. (Anyone know for sure?)