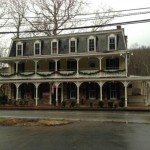 Originally built in 1881 as the Excursion House, the site became the Inn at St. Peter’s Village in 2005. It is rumored to have long ago been a place where foxes were raised in the basement to supply the local huntsmen; the owner gives a nod to this bit of history in its Fox Den Bar. There are several spirits in residence here. Folks say a ghostly infant can be heard crying, and the apparition of a bent-over elderly man can be seen in the hallways, and sometimes even on the street out front. Also, the second floor is reportedly the spot where a woman once hanged herself, and her footsteps and creaking sounds can be heard around the area.