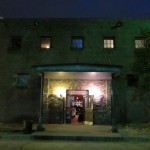 Reputed to be haunted by a ghost that enjoys moving things around, from pool balls to glassware. Some staff members claim they’ve been touched or grabbed. The building was a temporary morgue during a disaster in the 20’s and some believe some of those whose bodies rested there, stayed there.

The Myrtles Plantation: The True Story of America's Most Haunted House
Frances Kermeen