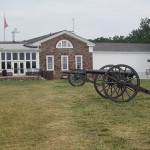 Historic Manassas National Battlefield Park contains an unfinished railroad ordered by Robert E. Lee. The Civil War-era railroad site is said to be popular with the spirit set, as several accounts of paranormal activity surrounding the area have been reported.