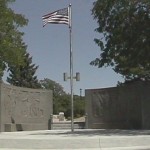 Unexplained feelings of sickness and disorientation have been reported by those who come to this park that honors the historic explorers.