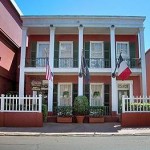 Reported to have been built on the site of an old execution site for the Spanish army, it is claimed that the soldiers who died on the spot continue to haunt the hotel to this day.