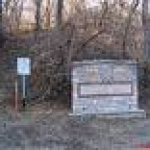 This park was known for its lynch mobs who would long ago target African-Americans. This is said to be the reason why the trees all spookily lean to one side. Folks report hearing drums and howling wolves here, and apparitions have been seen as well, according to legend stemming from a nearby Native American burial ground. Another noted site here is the stairway, around which some tales are attached. They say the very old and rickety staircase is nicknamed “Stairway to Hell” and that mysteriously there are always more stairs to count going up than going down. Note: Be very careful if you try the old stairs.

Ghost Hunting: How to Investigate the Paranormal
Loyd Auerbach