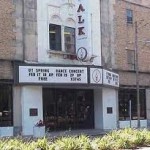 Once the Park Theatre, now called “Falk Theatre.” Back in the “Park Theatre” days an actress named Bessie Snavely supposedly hung herself in her third floor dressing room. Her ghost is said to haunt the entire theatre.