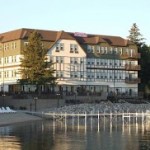 Twin Cities Haunted Handbook: 100 Ghostly Places You Can Visit in and Around Minneapolis and St. Paul
Jeff Morris

House of Spirits and Whispers: The True Story of a Haunted House
Annie Wilder