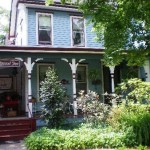 This 1878 inn, named after Josiah Wedgwood (of the china), is said to be haunted by the ghosts of Joseph Pickett and of a little girl named Sarah. A point of historic interest is that George Washington and his men camped on this land during the American Revolution, shortly before his famous crossing of the Delaware.

Inn of the Hawke