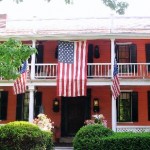 Visit this inn and you may meet the ghost of Orrin Granger, the pioneer who built it in 1812. Or you may spot Major Horton Buxton, after whom the inn was named. Major Buxton operated the inn during the late 1800s. Former innkeeper Bonnie Bounell is also said to have stayed on in the afterlife, and appears in Room 9 as a lady in blue. A ghost cat is also here, some say, and on a more spooky note, witnesses have seen something shadowy in Room 7 and also in the basement. Folks have heard their names being called out and unexplained footsteps, and doors open by themselves as well.