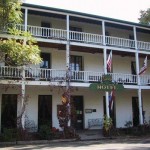 This hotel boasts a couple of ghosts: a young girl who appears dressed all in white, and a well-dressed gentleman with a cane. Other strange happenings reported here include lights that fade in and out, beds that become rumpled in a minute, and noises at night.