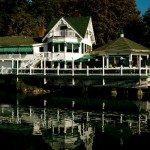 The ghost in residence here is Mrs. Beanning, a one-time governess for former owner John S. MacMillan. Mrs. Beanning’s ashes were in an urn on the mantle, but when the new owners moved her urn to the family crypt, Mrs. Beanning’s spirit was not amused. Since then, she plays pranks on the owners, re-igniting just-blown-out candles, turning on fans and blenders, turning the lights on and off.