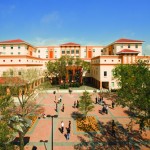 Once the “Bay Haven Hotel,” the Keating Center building of Ringling School of Art and Design is believed to be the “haunt” of a young girl who hanged herself there years ago. She appears walking down the hallways of the building. Some art students say she swishes their paintbrushes around in their rinse cups when they’re not looking.