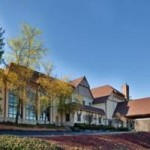 This former Ramada Inn, now Holiday Inn, is said to be haunted by the ghost of a little girl named Aggie who used to live in the building. According to the tales told in these parts, Aggie fell to her death from a window of the barn, which was located where the banquet halls and front desk now stand. Those lucky enough to meet her may fine her running through the halls or peeking at you around a corner.

Another tine, two elderly ladies staying in one of the 300s rooms got the fright of their lives when they came upon a dead man in their bathtub. After they ran out screaming, staff checked the bathroom and found nothing there.

Ghosts of St. Louis: The Lemp Mansion and Other Eerie Tales
Bryan Alaspa