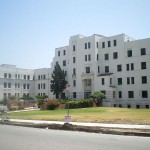 Seen on the TV show Ghost Adventures, the historic hospital is said to be haunted by many patients who died traumatically here. The site has been used as a setting for a great number of films including Outbreak, To Live and Die in L.A., and Day of the Dead 2: Contagium, as well as for many TV shows and music videos.