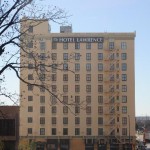 This hotel opened in 1925, and a lot of mysterious happenings occur here. On the 10th floor, witnesses have reported the sound of crying and footsteps in high heels, along with cold spots and strange shadows — it is said that a woman in the 1940s jumped or fell to her death from the presidential suite, and a congressman may have committed suicide here as well. This is said to happen between midnight and 6 a.m. The ghost of a gambling man is said to haunt the second floor, where there was an illegal casino in the 1920s-1930s. In the basement, staff members have said that laundry carts move by themselves.

Spirits of Dallas: The Haunting of the Big D
Brian Righi