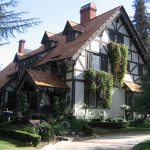 Built in 1906 in the middle of Mira Flores Park by builder Davis Donald for Mr. and Mrs. Kirke Field. Both had moved West due to suffering from ‘Consumption’ (Tuberculosis). They met at a sanitarium in Colorado and were friends of Doc Holiday. Mrs. Field died shortly after the mansion was finished, and Mr. Field sold it soon after to the Moore family (Moore Middle School/ owners of Redlands Daily Facts Newspaper) which owned it for nearly 7 decades. One prominent guest of the house was California governor in the 1920s, Friend Richardson, and an apparition matching his description was seen by two people in 2005. The specter was crawling on hands and knees, dressed in night clothes, and stopped, turned and smiled, and then continued on in the direction of the room where the governor had stayed many decades earlier. Several people are recorded as having died in the house, which has approximately 25 rooms. Fieldmoore was once owned by the president of General Mills, and has had butlers, cooks, gardeners, governesses, and maids working on staff. Ghosts that have been sighted include one dubbed ‘the tall man’, which once invited a construction worker to come down the outdoor stairs that lead to the cellar. The worker was discovered sitting at the top of the staircase, crying, shaking his head and repeating ‘I don’t want to go down there!’. The ‘tall man’s’ figure has been seen at night in the main dining room with his arms folded across his chest, but he is only seen in the reflection of the leaded glass windows of the adjoining living room. He does not fit the description of either Mr. Field, nor Mr. Moore, so his identity is a mystery. a young man has been seen sitting in the dark on the inside stairs of the cellar. Another spirit there will climb the grand staircase, each step clearly heard, and then knock gently on the door of the master suite at the top of the stairs. Sometimes the door handle will also be turned! The burglar alarm for the mansion would go off regularly when the owners were not at home and the police would come out only to find nothing. One time the alarm went off when the owner was at home and the police arrived. The owner let the police in to search the mansion but no one was found. The policeman drew his gun and went to search the house, but after being informed of the reputation of the house being haunted, the brave officer’s hand and the drawn pistol were shaking! He could handle a burglar, no problem, but a ghost was another thing altogether! Doors will open and slam even when there is no wind, and the electric gates have often opened and closed by themselves. Once, a former owner of the house, had his name called loudly from a lower floor in the house. The owner heard a younger woman’s voice call his name out loud. The man figured someone had come inside the house and was looking for him so he responded ‘Yes? I’m upstairs!” , but when searching found no one in the house. What was spooky about this event was that this owner’s name was ‘Kirk’, which is the same name as the original owner (Kirke Filed). Another worker complained about being followed by an apparition that was dressed in a maid’s uniform. This spirit would not cross the threshold of the master suite. Today the house is the executive mansion for the president of the University of Redlands.