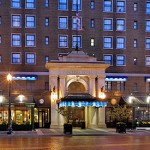 In the old part of the hotel, which is now reportly the hotel’s smoking section, objects have been witnessed moving about by themselves.