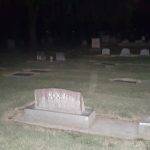 This cemetery is 4 or 5 cemeteries in one: Acacia (Masonic), Longfellow, Pioneer, Pauper’s Field and St. Stanislaus. Many accidents/deaths have occurred along Scenic Ave along with young, stupid gang bangers who’ve toppled tombstones and columns over the years. The old hospital across the street is also haunted. Acacia has been a hot spot for decades with rumors of a woman who screams day and night, even if you’re driving through the lanes. I originally scoffed at this but I did hear the scream one night while ghost hunting with friends. Aside from her I’ve heard EVPs of many disembodied voices, one of a young boy around 15 who my friend and I talked about possibly dying in a car accident…as a psychic medium I was picking that up, and on the voice recording he says, I’m driving (then something muffled after) before I ask anything about how he died on the recording. I’ve gotten many other voices there including a pervy guy who says “hey you”, “hey girlie” — in reference to a friend of mine’s teenage daughter who got spooked by the main mausoleum and got hyper emotional crying and didn’t know why—she said she’d never go back. This area by the mausoleum has caused other problems, I’ve always seen a tall shadow man lurking around here……day and night but he’s more visible at night or just before dusk is best for taking pictures….I saw him once behind my car when I started to hear footsteps around me…I was alone at the time and freaked out and saw him in my rear view mirror. He’s also wrenched a friend of mine’s shoulder who’s a medium….and he’s spooked other people, everyone gets an uneasy feeling who I bring around the mausoleum…which I was told by someone who volunteers there has been vandalized over the years…..broken glass, bums and druggies steal marble vases to sell, etc. (In fact, last time I was there my friend Melissa and I saw a drug deal going down…there’s always nefarious stuff going on there so be careful, don’t go alone….if you go during the day you’ll be fine. One of the things I love about this cemetery is it’s not gated and you can stay until 8PM and even if you stay longer….the cops don’t care nor really come around as long as you’re not causing trouble or hanging out by the Scenic side. But there are bums and drug deals and other odd activity that goes on as well as people on bikes who sneak up on you on the lanes day and night. I haven’t encountered any other real negative entities there other than the “mausoleum man” who I think is a protector entity…possibly a former caretaker. I’ve gotten voices of women and children…a girl singing, a woman who laughed at me talking about eating pomegranates growing in a cemetery (I didn’t, but thought it would be odd to eat something growing in a cemetery). I’ve had spirits say my name and names of my friends during investigations…they seem to know me well and said “Ryan is here!” on a ghost box session with the local paranormal group Chillseekers (check out their youtube videos and facebook page, they’re great!). Other cemeteries in the area that are active are Lakewood Cemetery–I went there once and got all kinds of voices during the daytime….I also recently researched and found out a ghost town called Empire City (south of current Empire and near the cemetery) was flooded and destroyed in the late 1800s so I will be exploring by the river area near the cemetery soon. Wood Colony (a Brethren cemetery) by the Vintage Faire Mall is also haunted and I’ve had spirits tell me to Go Away! One woman spoke German, others seems irritated I was there….and the Brethren do watch you like a hawk out there even though it’s in the country so hang around long or go during the day and be respectful. But anyway, I’ve gotten orb photos, pink mists, seen shadow figures, light anomalies, blue glowing orbs…not just me, but others I’ve taken out there to Acacia cemetery. It’s an easy access cemetery, you can park your car on the lanes…..the St. Stanislaus side is also quite haunted….in fact I’ve noticed the more recent the burials, the more likely you are to get activity and there are always fairly fresh burials in random places out there. The back lane that wraps around to the St. Stan side is probably the creepiest part of the cemetery….that’s the Pauper’s Field area….I’ve heard footsteps on the lane and voices, I was with 2 friends at the time durin the day and we all heard the footsteps following us and a voice on the EVP recorder. If you head out there during the warmer months, beware of mosquitos….the wintertime you don’t need to worry so much.