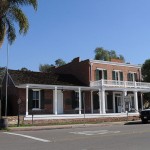 Built by Thomas Whaley in 1857, this home once included the town’s courthouse, general store, granary, theater and morgue. It is now a National Historic Landmark and museum, and folks say it’s haunted by the ghosts of Whaley family members and the spirit of another man who was reportedly hanged on the site before the house was erected.

The Haunted Whaley House, Old Town, San Diego, California: A History and Guide to the Most Haunted House in America
Robert James Wlodarski