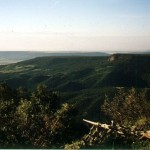 Rumored to be a “gateway to Hell”, the place is said to have once had several cat totems distributed around. The cat totems were said to guard the gates and as long as they remained in place, the gateway could not open. According to legend, the cat totems have been slowly disappearing and one day soon the totem protectors will no longer be able to keep the gates closed.