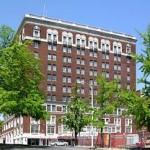 At this 1925 hotel, not only living guests can be found. Three ghostly men are said to stand around in the ballroom, keeping an eye on things. On the second floor, there is a man’s apparition who smokes a pipe and sits at one of the tables. Those with sharp eyes may notice that he kicks the tablecloth with his foot. Folks say you can also feel the presence of another ghost, that of an elderly woman who passed away in one of the rooms.

Jeters Chapel of the Brethren Cemetery