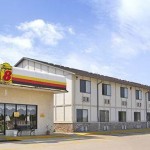 This Super 8 has been the site of numerous strange happenings. Witnesses say the lights and air conditioning will turn on and off by themselves, doors will open on their own, and mysterious whistling can be heard. Clerks have experienced electrical malfunctions with the phone, such as all the lines lighting up at once or phone calls coming from vacant rooms. Some attribute the eerie events to a cemetery that lies adjacent to the motel.