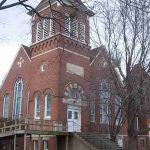 Built in 1901, the Stanford Cumberland Presbyterian Church had been loved and enjoyed by it’s congregation until it was sold in 2004. Between 2004 to 2012 it has changed hands four times since. The first owner lived it for a very short time. It was then sold and became an events venue business. That owner failed to repay a large loan taken out on the property and it went Into foreclosure and neglect. The third owner was a local Bloomington resident. During this ownership the property was vandalized and copper pipes, brass door hardware and stained glass were taken from the property. The building itself.f was still in great shape, however the weather changes over the last couple of years being empty had affected the building. With it’s demolition looking like it’s most likely future, luck happened to finally find the church building. Two gentleman from California found and bought the property and have since recovered 6 of the 7 windows, replaced the piping and have continued plans to fully restore the building. The current owner has experienced 3 desperate entities within the building. The first was an older stern gentleman in the basement, believed to have been a caretaker or prominent member of the church. He was watching over other space as if wanting to know what business the new owners had being there. The second is a young girl of 7-8. She makes her appearance around Halloween time and enjoys moving and messing with Halloween decorations. It is believed that she probably had never seen those kinds of decorations before, especially in the church, and finds them amusing. The third is “the whistling woman”. She has been heard going about her business in the kitchen downstairs whistling a short cheerful tune. None of these experiences felt ominous or threatening, although the “caretaker” did give the feeling of a stern person of authority.