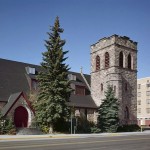 The bell tower of the church is reportedly haunted by a stonemason who fell to his death while constructing it. The legend claims that two Swedish immigrants who were skilled stoneworkers were hired to construct a bell tower on the church, and one day, when the tower was about halfway completed, both men simply failed to come back to work. The unfinished tower was capped off with a roof and used as a study for a time, however, the pastor who used it reportedly complained of banging noises coming from the walls and it went unused for a time. Years later construction on the bell tower resumed. Those workers were apparently bothered by strange noises, banging sounds and whispered voices and many refused to work on the tower after having a chilling experience. Someone apparently came up with the idea of building the ghost its own room in an attempt to appease him and apparently, this allowed the workers to return to their task with some peace of mind. Years later, it is claimed that one of the original stonemasons returned to the church and told the pastor that his fellow worker had slipped and fallen to his death. Fearing that a police investigation would lead to his being deported, he had sealed the body up in an unfinished section of the wall and simply walked away.