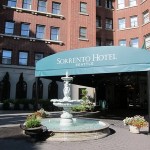 Guests at this haunted hotel have reported seeing the apparition of a woman on the fourth floor near room 408. Disembodied footsteps also have been reported, as well as glasses that move on their own in the hotel bar.