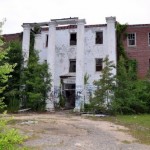 A former insane asylum with a reputation for treating its patients cruelly (especially black patients of which there were a disproportionate amount), this place is an obvious choice for claims of haunting. People claim to feel hot and cold spots, see items moving and hear ghostly sounds and footsteps. Due to trespassers and a fire that burned part of the first and second floors, it is now routinely patrolled by police so trespassing is not recommended.