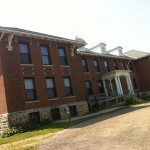 Built in 1908, this building is rumored to be hopping with haunts. It has been a mental institution among other things, and at least 80 people are said to have died here. For ghost enthusiasts, the place is available for private lockdowns.