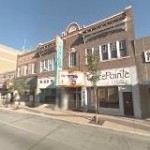 Some say a presence can be felt by those seated in the balcony at late-evening shows. Some who have seen the spirit say he wears Vaudeville-type clothing. It is believed that the man was a performer at the theater in the past, but his identity remains a mystery.