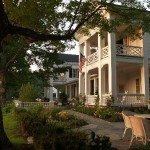 Allegedly haunted by the former mistress of the house, Mrs. Brown. People have reported full body apparitions, cold spots, slamming doors and some claim that the ghost has actually appeared and spoken to them.