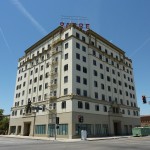 Believed to be haunted by people who died in a fire there decades ago, floor 7 is supposedly the hot spot of activity. Allegedly workers who were involved in a 2008 renovation reported numerous poltergeist/haunted activity including being touched, pushed and other sorts of mischief.