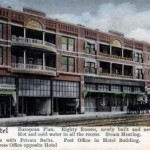 Said to be haunted by the ghost of a woman who died there, as well as by a pacing cowboy ghost.

The Ghost of the Cuban Queen Bordello: A Story of a 1920's Jerome Arizona Madam
Peggy Hicks