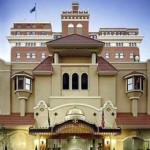 This 405-room 1914 hotel has been visited by many a celebrity, including Bob Hope, Clark Gable, Charles Lindbergh and Bing Crosby. It is haunted by many a ghost too, including a woman in 1920s garb who walks along the mezzanine, peering over the railing to the lobby below. Folks believe she is Ellen McNamara, who in 1920 fell to her death through a skylight.