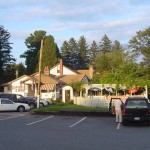 If you ask around at this restaurant, you may get a tale with your meal. Locals say that many years ago, a man in his 30s or 40s was killed behind the building in a hit-and-run accident. His ghost has been seen an upstairs room, often lying on the bed or sitting on the sofa.

The Shawnee Inn and Golf Resort