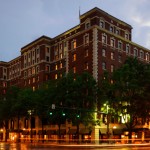 Room 311 is alleged to be haunted by the ghost of Annalisa Netherly. Although not much is known about her, her legend claims she was living in the hotel and was killed when her husband caught her in a tryst with another man.