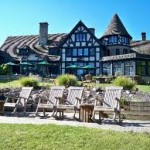 It is alleged that the original owner of Punderson manor committed suicide by drifting out on the lake in a bathtub, and then, when he reached the middle, he pulled the plug and drowned. Why precisely he would have chosen this method is not known, whether it actually occurred like this is unknown, but this is the claim. Punderson reportedly has any number of ghostly occurrences, from a variety of ghosts but the most famous of the stories is one that took place in the dining room in the late 70’s, where people claim that for a period of approximately three hours late one night, the ghost of a man who appeared to be a lumberjack seemed to hang from the rafters. Apparently the apparition vanished with the sunrise, but several employees claim they witnessed it. People have also reported seeing a man in grey, felt cold spots and other unexplained sounds.