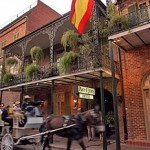 At this hotel you may find the ghost of a small girl in old-fashioned clothes. She may ask if you have seen her grandmother before she vanishes. Also reported here have been the sounds of music, voices, and footsteps.

Haunting of the Octoroon Mistress