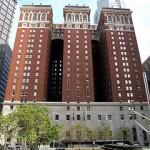 At this famous 1915-16 hotel where among other luminaries JFK has stayed, and Bob Hope proposed marriage in 1934, there are said to be two haunted floors. Floors 22 and 23, both unused, are visited by strange sounds, cold wind gusts, and ghosts that hide and watch folks, giving them an eerie feeling. It is said that a murder once was committed on these floors.

Ghosts of Penn's Woods: Ghost tales from in and around Pennsylvania state parks and historic Sites
Jeffrey R. Frazier