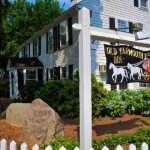 The inn was established in 1696, and is the oldest on Cape Cod. It is said to be haunted. One witness reported an apparition that appeared at the foot of his bed in 1999. The ghost was a jowly man wearing a flounced white blouse. Another witness, in 2002, reported that a ghost sat on his bed and then shook the bedposts. Lights and appliances turn on by themselves, objects move on their own, and members of the wait staff have heard their names whispered.