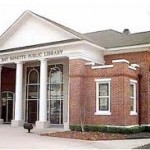 People claim to feel unseen presences watching and hovering over them in the library.