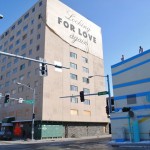 This hotel is no longer in operation but when it was running, people claim it was haunted by the ghost of a little girl.