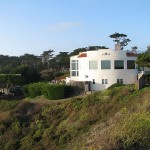 This restaurant on a cliff overlooking the Pacific Ocean was originally built in 1927 as a speakeasy, but turned into a restaurant in 1933. It is said to be haunted by the Blue Lady, who folks say died near the restaurant. The story has been seen on TV’s Unsolved Mysteries. In 2008, TV’s Ghost Hunters revealed that the restaurant owners had rigged hanging lights to sway and a face to appear in a mirror in the ladies’ restroom, among other spooky tricks. The owner reportedly admitted to the rigged hoaxes, but stated that real paranormal activity has been experienced here since the 1930s.