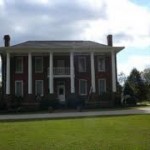 The current owners of the Moody Brick claim that the old plantation is definitely not haunted. However, that doesn’t stop the tales from being told and retold. In the absence of documented fact, people are free to claim their own version of history and never is that more evident than at the Moody Brick. A former slave plantation, the Moody Brick House is ripe for invented history and often, folklore being more interesting than fact anyway, the lore becomes legend and legend becomes truth. It should be noted however that there is not a single shred of evidence to support the stories that surround the Moody Brick, it is all just tales handed down from generation to generation. The most popular of stories involves the treatment of slaves on the plantation. Locals claim that the owners of the Moody Brick (owner’s names unspecified) were particularly cruel to their slaves and punished them far beyond what was considered acceptable treatment, even for the South. The lore claims that sometime in the immediate aftermath of the Civil War, the freed slaves took revenge on their former masters and slaughtered them all in their beds. They then ran into the countryside where they were hunted down by members of the KKK, brought back and hanged in front of the Moody Brick. This story however contradicts another popular story that surrounds the Moody Brick, which is that during the Civil War, it was used as a hospital with injured and dying soldiers littering the rooms and hallways and also that it was burned out by the Union soldiers on their march through Alabama. As it is doubtful that the former plantation owners would have still been living in a burned out home occupied by the Union following the Civil War, it is hard to reconcile both versions of events, which locals equally claim to be true. The Moody family took possession of the property more than a decade after the Civil War. The house that stands today was built after a fire completely destroyed the property in 1888. There are dozens of tragic stories that surround the Moody Brick house, all of them as apocryphal as the ghost stories. None of the ghost stories have any central cohesion, none seem to repeat and all are a mishmash and retelling of lore, as opposed to any specific piece of evidence. Is the Moody Brick really haunted? Who knows, but with a history this rich and imaginative, it doesn’t really need to be.