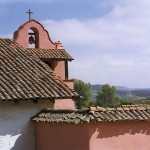 Visitors to this mission may catch a glimpse of the spirits of the Chumash Indians and Spanish soldiers who died during the 1820s Chumash uprising. The mission has been featured on TV’s Ghost Adventures.