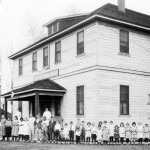 Once the Kern County Kids Shelter, the Mexican restaurant Sinaloa’s 100-plue-year-old building is said to be a hotspot for paranormal activity. The feelings experienced here are generally good ones, reports say.